New York Gov. Andrew Cuomo (D) signed a bill on Monday further decriminalizing marijuana possession and enabling those with prior cannabis convictions to have their records expunged.

The law, which takes effect in 30 days, will make it so that possession of up to two ounces of marijuana is punishable by a $50-$200 fine with no jail time. Cuomo said the state’s existing cannabis policy has disproportionately impacted communities of color and, with the signing of the legislation, “we are ending this injustice once and for all.”

“By providing individuals who have suffered the consequences of an unfair marijuana conviction with a path to have their records expunged and by reducing draconian penalties, we are taking a critical step forward in addressing a broken and discriminatory criminal justice process,” he said in a press release.

✔@NYGovCuomo
I just signed legislation decriminalizing marijuana use in New York & creating a process for expunging past convictions.

Communities of color have been disproportionately impacted by laws governing marijuana for far too long, and today we are ending this injustice. 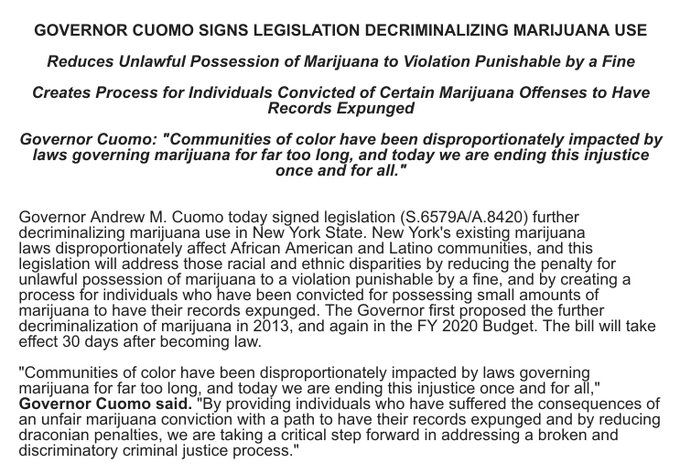 While reform advocates celebrated the development, it’s not the comprehensive legalization bill that many hoped would pass before the end of the legislative session. Cuomo, who included legalization in his budget proposal and negotiated with lawmakers throughout the year to get a bill to his desk, ultimately said a deal couldn’t be reached in time.

Debates over how to allocate tax revenue from cannabis sales and whether to allow individual jurisdictions to opt out of allowing marijuana businesses operate were two major issues that derailed the legalization push.

Decriminalization expansion proved easier to accomplish, with the Senate and Assembly approving the legislation in the closing hours of the session last month.

Sen. Jamaal Bailey (D), sponsor of the bill, said that creating a “mechanism for expungement, both retroactively and forward-looking, is a step in the right direction in finally ending the heavy-handed war on drugs that has decimated communities of color.”

Providing for expungements was a top priority for legalization advocates, who argued that establishing a legal cannabis market that would create economic opportunities would have to be accompanied by a pathway to clear records for those with past marijuana convictions.

“This law is an important step in righting decades of injustice caused by the state’s current drug laws,” Assembly Speaker Carl Heastie (D) said. “Decriminalizing marijuana and expunging records for those with low level offenses will go a long way towards helping our communities, and especially people of color, who have been devastated by them.”

“By removing the barriers and stigma that come with these records, we clear the path for many New Yorkers to find a job, housing and go on to live successful and productive lives,” he said.

Kevin Sabet, president of the prohibitionist group Smart Approaches to Marijuana (SAM), said the legislation isn’t “perfect,” but there’s “no use making perfect the enemy of good.”

Not a perfect bill, but no use making perfect the enemy of good.

This is common sense legislation we are proud of – and it’s the sensible alternative to legalization, which we won’t let happen @learnaboutsam https://twitter.com/danclarkreports/status/1155836129746345985 …

The marijuana decriminalization bill has been delivered to @NYGovCuomo for a signature.

“This is common sense legislation we are proud of,” he said, arguing that SAM contributed to the defeat of marijuana legalization in the state while holding up decrim expansion as an alternative.

Sen. Diane Savino (D), a longtime champion of cannabis reform, responded to the bill’s signing by stating that decriminalization is just “[s]light progress… cause you are still buying it from criminals, just sayin.”

Slight progress…cause you are still buying it from criminals, just sayin’

“For too long, communities of color have been disproportionately targeted and negatively impacted,” she said. “The Senate Democratic Majority will continue our efforts for full legalization and regulation of marijuana, and today’s decriminalization is a good first step.”

Assembly Majority Leader Crystal D. Peoples-Stokes (D) said that people of color “have been the target of discriminatory criminal justice policies and have suffered serious consequences for the possession of small amounts of marijuana, while others were never arrested or charged.”

“By decriminalizing marijuana use in New York once and for all, we are ending this repressive cycle that unfairly targets certain communities,” she said.

CrystalPeoplesStokes
✔@CPeoplesStokes
By decriminalizing Marijuana use in New York once and for all, we are ending this repressive cycle that unfairly targets certain communities. I thank @NYGovCuomo for signing this bill and for taking this critical step forward in the name of equality!
22
8:38 AM – Jul 29, 2019 · Buffalo, NY

Efforts to legalize cannabis also stalled and failed in neighboring New Jersey this year, with lawmakers stating that the issue would be left up to voters as a 2020 ballot measure. In Illinois, meanwhile, Gov. J.B. Pritzker (D) made good on his campaign promise and signed a legalization bill last month.