A nascent network of distributors is sprouting in California, taking marijuana business ‘from backpack to briefcase’ in a potential model for national supply chains

COACHELLA, Calif.—Low-slung industrial developments are rising along Avenue 48 here, a dusty stretch at the edge of relentless desert 140 miles from the Pacific Coast that’s becoming a hub for cannabis producers.

Around the state, a nascent network of specialized distribution companies is springing up to connect these centers of licensed marijuana growers and processors to hundreds of retail outlets, providing something entirely new in the marijuana industry: A legitimate supply chain.

The widening state-by-state legalization of recreational marijuana across the U.S. is bringing growers, distributors and sellers of the drug out of the shadows to stitch together businesses under a unified supply chain as the industry scales up.

California’s market is by far the largest in the U.S. in both geography and in the number of users, experts say, even though recreational pot use became legal only this year. Lawmakers designed a regime in which state-licensed distributors, the middle link in the supply chain, take possession of the goods before selling them to retailers. That’s injected new capital into the business, from finance to cultivation and transportation, that operators say will help it to grow faster.

A Growing BusinessSpending in the U.S. and Canada on legalcannabis is forecast to expand as new lawsallow recreational use.Source: Arcview Market Research / BDS Analytics
.billionHistoricalForecast2012’14’16’18’20’22051015202530$35

California distributors say that by developing reliable logistics to support this state’s cannabis market they’re creating a model that could work for distribution in other regions. If pot is legalized at the federal level, mass distribution could then be in position to overtake the illicit trade.

“There’s been this huge focus on a number of things other than, once it’s grown and or manufactured, how do you get it from point A to point B?” said Sturges Karban, chief executive of MJIC Inc., a state-licensed distributor that provides logistics services to cannabis producers and retailers. “It’s almost like this forgotten aspect of the industry.”

MJIC, which has distribution hubs in Coachella, Oakland and Long Beach, is one of several companies developing logistics networks for the market.

Interest in cannabis as an ingredient in food and drinks is on an upswing: Beer brewing giant Constellation Brands Inc. took a $4 billion stake this month in Canadian marijuana grower Canopy Growth Corp. , which makes cannabis-infused drinks and other products. Recreational use in Canada will be legal in mid-October, and edible and drinkable cannabis products are expected to be legalized nationwide there by 2019.

Companies such as MJIC are betting on healthy growth in the U.S., where nine states and Washington, D.C., have legalized recreational use. Euromonitor International estimates the U.S. market for legal marijuana sales will total $10.2 billion this year. BDS Analytics and Arcview Market Research, cannabis industry research groups, projected in a study that illegal sales of marijuana in the U.S. will top $53 billion this year.

‘We model our business almost directly after the beer distributor,’

They also must overcome a fierce independence within the cannabis community. For more than 20 years, since California legalized cannabis for medicinal use in 1996, growers or cooperatives handled the delivery of their products to end users themselves.

California’s adult-use legislation sets a framework for a wholesale supply chain by licensing distribution businesses, separate from the licenses granted to producers and retailers. That means distributors can handle transportation and logistics for multiple manufacturers and represent multiple brands when selling the goods to stores—similar to distribution in the alcohol industry. Cannabis distributors in California also must test products for safety and pay state taxes on the goods.

“We model our business almost directly after the beer distributor,” said Eric Spitz, co-founder of distributor C4 Distro. Manufacturers deliver their products to C4’s facilities, where the company handles testing and taxes. “Then we deploy it to stores with our field force of sales people and our field force of delivery teams and trucks,” Mr. Spitz said. “

Still, alcohol is a legal product while cannabis, on a federal level, is not. That means marijuana can’t cross state lines, even when two neighboring states have legalized it. 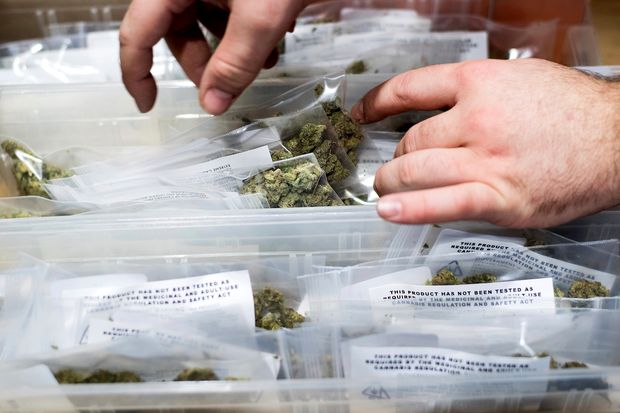 For generations, most of California’s marijuana crop has been shipped out of state, handled by “well-oiled” illicit distributors, said Tom Adams, an analyst with BDS Analytics. He estimates up to 80% of all marijuana consumed in the U.S. is grown in California.

Distributors aren’t expecting much competition, or help, from existing logistics and transportation companies. Operators that serve other industries must be licensed specifically to handle cannabis, and they would have to build or lease new facilities that comply with state regulations and operate only in cash.

Local rules add more complications. Many municipalities in California still ban cannabis operations outright, and others have devised tough zoning rules for producer, distributor and retailer sites. That drives up the costs for the limited real estate available.

Last month, California cannabis businesses faced a test when regulations detailing testing and packaging requirements went into effect. All cannabis goods for sale in California now must be tested at licensed labs and have labeling showing the amount of THC—the chemical that causes intoxication—and other ingredients, and be sold in child-proof packaging.

On July 3, right after the rules took hold, shelves at West Hollywood’s MedMen and Alternative Herbal Health Services were nearly barren as the shops awaited deliveries of new vape pens, gummy edibles and “flower,” as the marijuana plant is called. Sam Schoemann, a C4 Distro salesman, stopped at A.H.H.S. and other stores to assure his clients that products in “legally-compliant” packaging were on the way.

Dressed in a red-and-white checked Oxford shirt and khakis, and making his rounds in a mid-sized Acura sedan, Mr. Schoemann looked more like an insurance salesman than stereotypical images of marijuana dealers of years past.

“Right now there’s a big need for education in the market,” he said. “We’re moving from backpack to briefcase.”

Read more from the source: The Wall Street Journal