CBD, the widely available cannabinoid touted for various health benefits, may have the potential to help people with serious alcohol issues, according to a new review of current scientific evidence.

Not only does cannabidiol appear to “facilitate drinking reduction,” the paper’s authors write, but research also shows the compound “may provide idiosyncratic protection to the liver and brain, which could reduce the development and impact of alcohol-related liver disease and alcohol-related brain injury.”

The review, which is awaiting publication in the journal Frontiers in Pharmacology, offers a comprehensive look at how promising the data is so far regarding the effectiveness of CBD on alcohol use disorders (AUD). The authors, however, also call for human clinical trials, of which none have been published to date, to “pave the way for testing new harm reduction approaches in AUD.”

Researchers in France and Belgium reviewed 26 previous studies published between 1974 and June 2018 that explored the effects of CBD on animal subjects dosed with ethanol. They found several studies that showed CBD can reduce alcohol consumption. In one, for example, researchers discovered that mice administered CBD were less motivated to work (in this case, push a lever) for access to a liquid solution that included 8 percent of ethanol.

“Experimental studies converge to find that CBD reduces the overall level of alcohol drinking in animal models of AUD by reducing ethanol intake, motivation for ethanol, relapse, and by decreasing anxiety and impulsivity.”

Other studies found that mice regularly dosed with the non-intoxicating marijuana compound were also less likely to relapse after they’d been weaned off alcohol, even when they were stressed.

Because of its impact on various aspects of the disease (including “intake, motivation, relapse, anxiety and impulsivity”), CBD “could have a significant action on drinking levels in human subjects with AUD” the review’s authors write. They add, however, that it would be useful to have data using binge-drinking models and models that focus on long-term exposure to alcohol. 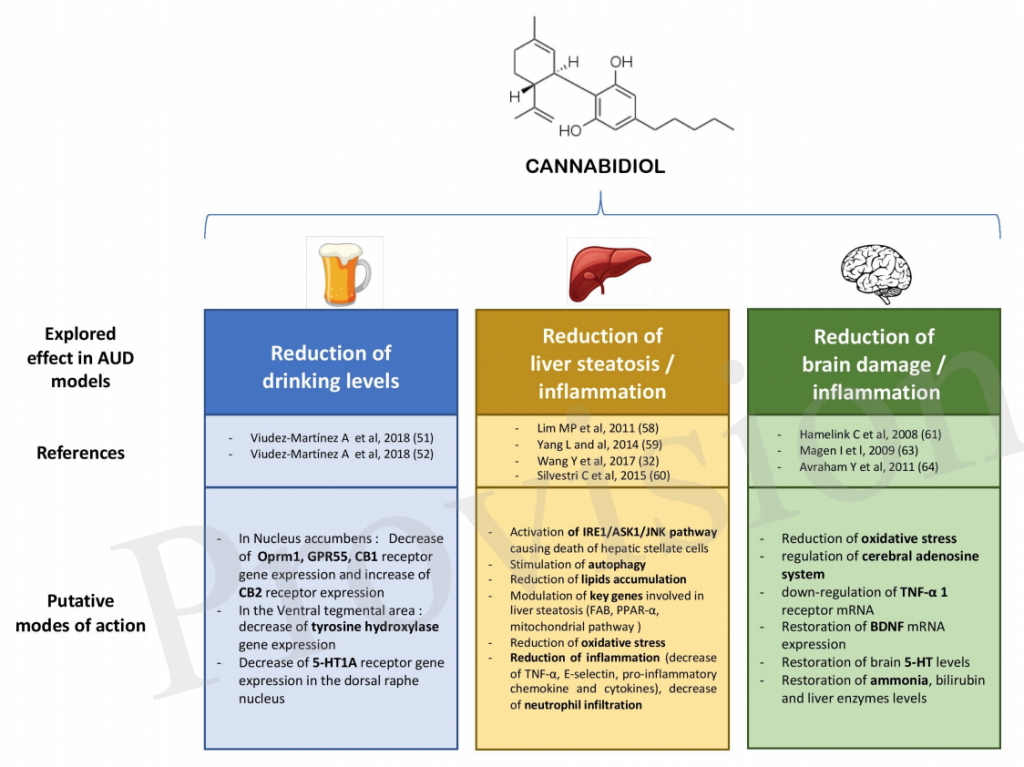 Via Frontiers in Pharmacology.

The review also highlighted evidence showing CBD could affect alcohol-related liver inflammation. In one study, researchers found that the livers of mice that’d been given the compound prior to being force-fed alcohol every 12 hours for five days were less damaged than those of mice not exposed to CBD.

“CBD seems to have valuable therapeutic properties for ethanol-induced liver damage, through multiple mechanisms,” including the reduction of oxidative stress, inflammation control, and the death of certain cells responsible for large amounts of scar tissue, the authors write.

Finally, CBD may also offer added protection to specific areas in the brain susceptible to alcohol-related damage. In one study, the brains of rats who’d binged on alcohol and given CBD were found to have lost “significantly” fewer brain cells in the hippocampus and entorhinal cortex. In those rats, CBD acted as a “neuroprotective antioxidant,” the review states. In another experiment, CBD also appeared to restore the neurological and cognitive functions of rats in acute liver failure.

“CBD has been found to reduce alcohol-related brain damage, preventing neuronal loss by its antioxidant and immunomodulatory properties.”

The authors suggest these overall benefits of CBD regarding problematic alcohol use may be due to the “complex” way the cannabinoid interacts with CB2 receptors, which are located throughout the body.

Currently, the review states, the pharmaceuticals available to help people with AUD stop drinking are “insufficiently effective at a population level, and new therapeutic prospects are needed. Moreover, no drug for reducing alcohol-related harms, either on the brain or the liver, has ever been studied.”

Plus, the authors conclude, “CBD could have many more positive effects in subjects with AUD, including antiepileptic, cardioprotective, anxiolytic, or analgesic ones. Human studies are thus crucially needed to explore the many prospects of CBD in AUD and related conditions.”

Meanwhile, there’s still time to submit public comments to the U.S. Food and Drug Administration on how the federal government should regulate CBD products, including supplements and foods. So far, hundreds of people have submitted information. The public comment period ends July 2.