30 years of user data on vaping

Clearly, many cannabis enthusiasts must have started experimenting with vaporization around this same time.

People have been vaping THC for 20 years. Clearly it’s not the THC that’s causing these new lung problems.

Commercial products required a little more time to make it to market. The first Volcano vaporizer, made by Storz & Bickel, appeared in the US in 2003. The first pen-size vaporizers appeared around 2006. Cannabis vape pens hit the American scene starting around 2010.

That gives us—at the very least—a solid three decades of anecdotal user data to work with when evaluating any potential harms involved.

So when a rash of people started getting seriously or even fatally ill after using vape pens earlier this year, it was obvious that something other than cannabis must be the culprit. The overwhelming number of cases of VAPI, vaping associated pulmonary injury, have been attributed to counterfeit products produced and distributed illegally without any regulatory oversight whatsoever.

At Leafly, our reporting team tracked these dangerous counterfeit pens from production to sale. We found a supply chain operating wholly outside the law and with a blatant disregard for public health. Theories on what’s causing VAPI range from dangerous additives to poorly manufactured pens, or possibly some combination of the two. No evidence has emerged to show THC, CBD, or any other cannabinoid is to blame.

Peer-reviewed research on the relative safety of vaping goes back 15 years.

Meanwhile, we have peer-reviewed evidence favoring vaporizers over leaf smoking that dates back 15 years. In 2004, a clinical study of cannabis vapor versus cannabis smoke found that “vaporizers can efficiently deliver cannabinoids while eliminating or drastically reducing other smoke toxins.” This study came within the context of cannabinoid delivery to medical patients, some with compromised immune systems, who are looking for the healthiest possible delivery mode for their condition.

So no matter what the cause of the current deadly outbreak, it surely isn’t cannabis. To suggest that cannabis—in vapor form or otherwise—has suddenly turned deadly is utter nonsense. It’s also irresponsible.

Perhaps someone should tell the rest of the media.

Journey of a tainted vape cartridge: from China’s labs to your lungs

Worst of the worst: WSJ

I’ve seen plenty of examples of poor, misinformed, and downright false reporting on the VAPI situation. But nothing dropped my jaw with the force of an op-ed published last week by the Wall Street Journal.

Written by Scott Gottlieb, the former FDA head who stepped down earlier this year, the piece began with a weirdly Orwellian headline. Leafly’s David Downs, who’s been breaking real news on this story for the past two months, noted:

There, I fixed it for you @WSJopinion cc @ScottGottliebMD 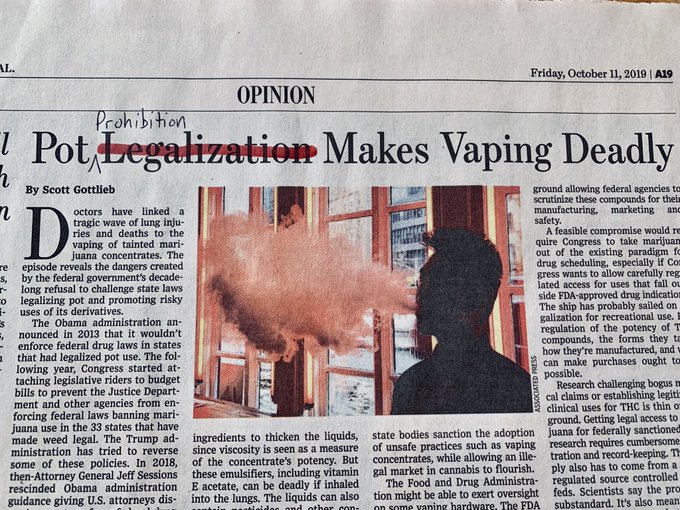 The word you seek is ‘tainted’

Still, at least the article’s first line is accurate: “Doctors have linked a tragic wave of lung injuries and deaths to the vaping of tainted marijuana concentrates.” But from there on out, it’s as if the word tainted doesn’t exist.

Gottlieb contorts logic and reason beyond recognition in a counter-factual attempt to conflate the regulated cannabis market in legal states like California with the unregulated illicit market in counterfeit vape pens that have been making people sick.