Officer Tulo will turn in his badge in January, forced into early retirement by the country’s waning war on weed.

In his eight years with the Police Department of Rifle, Colo., Tulo, a yellow Labrador retriever, has helped with more than 170 arrests in the town of 9,000. But one of his old-fashioned skills hasn’t just fallen out of demand since the state legalized marijuana, it has become a liability: State court rulings mean that Tulo’s keen nose for pot imperils his work on other drug cases.

As states and cities loosen their drug laws, the highly trained dogs their police departments use to sniff out narcotics can’t always be counted on to smell the right thing.

“A dog can’t tell you, ‘Hey, I smell marijuana’ or ‘I smell meth,’” said Tommy Klein, Rifle’s police chief. “They have the same behavior for any drug that they’ve been trained on. If Tulo were to alert on a car, we no longer have probable cause for a search based on his alert alone.”

Older canine workers across the country — and 14 narcotics dogs in Canada, where retail marijuana sales began last month — are being eased out of the labor force. When the Police Department in Winnipeg, Manitoba, went shopping this year for a pup, the Belgian Malinois they chose, named Ivy, arrived with a more modern advantage: She has no reaction to marijuana.

In many places that have legalized the drug, including California, Oregon, Maine and Vermont, most new recruits are, like Ivy, no longer being trained to sniff out pot. And even departments in states where marijuana remains verboten are hedging their bets.

“I just did a dog for a department in Texas that asked me not to put marijuana on her,” said Ron Cloward, the owner of Top Dog Police K-9 Training and Consulting in Modesto, Calif. “They had the feeling there could be some changes coming there, and they wanted to plan ahead.”

In Colorado, an appeals court ruling last year helped hasten Tulo’s retirement. Kilo, a drug-detection dog in rural Moffat County, flagged a man’s truck for containing contraband. When officers searched it, they found a pipe with what appeared to be methamphetamine residue.

But Kilo was trained to find multiple drugs, including marijuana. Even though no marijuana was found in the truck, the three-judge panel said Kilo’s signal was no longer a reliable indicator of illegal activity. The court ruled that officers therefore had no legal grounds to search the truck, and overturned the conviction.

The Colorado Supreme Court is reviewing the decision and plans to hear arguments next month. But some departments in the state aren’t waiting to show their marijuana-trained dogs the door.

Arvada, a community outside Denver, decided to retire one of its older dogs, Beaker, because of that case and other court rulings. Officer Brian Laas handed Beaker’s duties over to Rudy, a younger dog that is trained to detect four illegal drugs — cocaine, heroin, Ecstasy and methamphetamine — but not marijuana.

“This has been a really difficult thing for some of the smaller departments that can’t afford to take out trained dogs,” said Officer Laas, who is the president of the Colorado Police K-9 Association 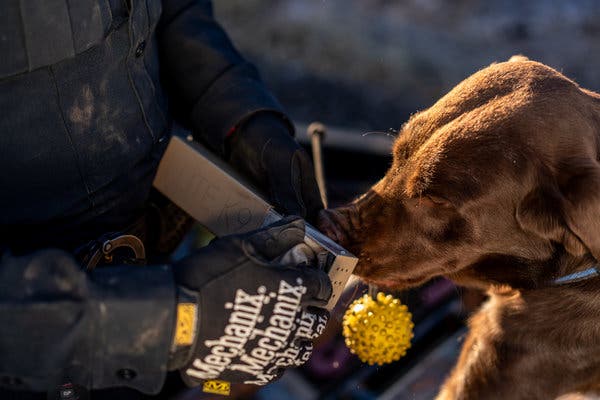 Suitable dogs don’t come cheap: It typically costs at least $6,000 to buy a working dog and thousands more to train it. A Rifle resident raised money on GoFundMe to buy the department two new Labrador puppies, Jax and Makai.

“The community really came together and rallied to help us out,” said Cpl. Garrett Duncan, Tulo’s handler and partner.

The laws and legal decisions around the use of drug dogs are something of a patchwork, leaving states grappling with what to do.

Some departments in states that have legalized marijuana have decided to keep their current dogs and take their chances in court, said David Ferland, the executive director of the United States Police Canine Association, a training and certification organization. Others have shifted their dogs’ duties, using them only in places where marijuana remains off limits, like jails and schools.

Many departments are trying to future-proof themselves by dropping marijuana from their training programs. “Almost every state is trying to get ahead of this,” Mr. Ferland said. “Nearly every one is having some newly trained teams not introduce marijuana odors to their dogs.”

But some are holding out. In Kansas, which shares a border with Colorado, cannabis is still part of the curriculum for canine trainees.

“The issue is on our radar, and we watch and research what states are doing as legalization crawls across the United States, but as of today all of our dogs are still imprinted on marijuana odor,” said Chad McCluskey, the master trainer for the Kansas Police Dog Association. “We are not considering a change to that approach.”

Michigan, which this month became the 10th state to legalize marijuana for recreational use, is trying to figure out what to do with the 50 dogs used by its state police.

“We’re still reviewing the law’s impact on our operations and determining next steps,” said Lori Dougovito, a state police spokeswoman.

Part of the problem is that old dogs really do have a hard time learning new tricks. Experts including Mr. Ferland and Dave Smith, the head trainer at Ventosa Kennel, which sells trained dogs to police agencies nationwide, don’t recommend retraining.

Officer Jared Bartunek, left, with Jax and Corporal Duncan with Tulo and Makai. Tulo will continue living with Corporal Duncan after his retirement.CreditRyan David Brown for The New York Times 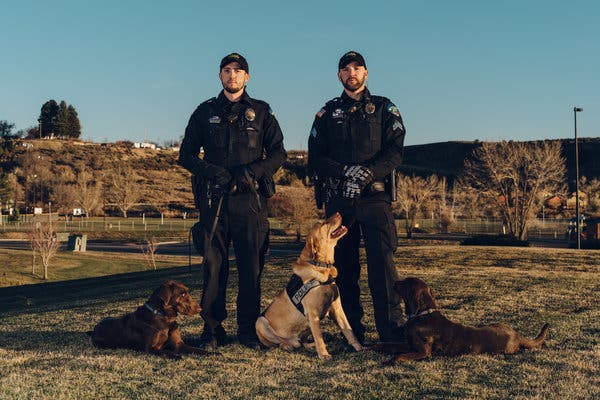 Even if a dog can be trained to stop reacting to marijuana, there will be no way to prove the dog didn’t slip up, Mr. Smith said.

“Any defense attorney is going to ask, ‘Has your dog ever alerted to marijuana?’” he said.

Even if marijuana legalization is putting some dogs out of a job, it’s not putting them on the street. Retired dogs typically go home with their handlers and spend the rest of their lives as pets.

When the idea of legalizing recreational marijuana in Illinois was floated last year by state lawmakers, one local sheriff — Howard Buffett, a son of Warren E. Buffett, the famed investor — said it would force the state’s 275 narcotics dogs into early retirement.

One police canine trainer suggested that many of the dogs would have to be euthanized, touching off a wave of criticism from astonished experts. The trainer’s boss soon retracted the statement, calling it “a bad choice of words.”

Canine officers were likewise appalled at the idea of their partners being put down.

When Tulo retires, he will continue to live with Corporal Duncan, who has promised him a life of hiking, camping and running around in Rifle’s parks with the household’s three other dogs. One of them is one of Tulo’s replacements on the force, Makai.

Like any veteran officer, Tulo gets annoyed with the rookies, Corporal Duncan said. And he doesn’t seem quite ready for retirement, either.

When Corporal Duncan went off to patrol on one recent workday and Tulo stayed behind, the bored dog retaliated by demolishing a full trash bin.

“He’s been in a cop car since he was a few months old, and he really likes the job,” Corporal Duncan said. “He’s going to be a bit frustrated about being left at home.”

Read more from the source: NYtimes.com