That’s the time difference between the first book and the last one on display now on the first floor at the Lloyd Library and Museum in downtown Cincinnati.

But the story these two books – the oldest and the youngest – tell goes way beyond what’s written on the pages.

They are the literal and figurative bookends of the Through the Rx Bottle: Medicinal Cannabis 1841-1937 exhibit, which focuses on the medical knowledge and applications of the cannabis plant.

The first book? That’s from 1588. It’s a guidebook for plants. It was produced to use for identification out in the field, said Erin Campbell, a research librarian and curator of the exhibit.

And the last? That’s from 1951. It’s a sort of pulp novel called “Marijuana Girl,” described as “a pitiless study of a young girl enslaved by the dope habit” on the back cover. 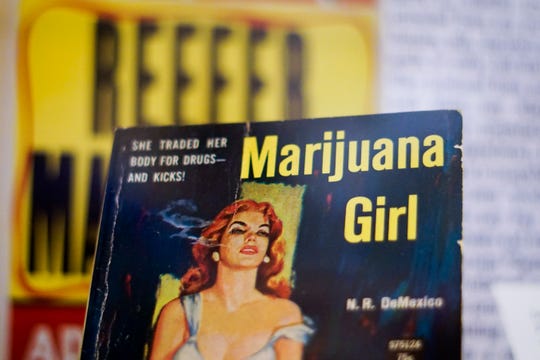 By the 1930s, cannabis gained criminal and racial associations illustrated at “Through the Rx Bottle,” a history of medicinal cannabis at the Lloyd Library and Museum. The government’s criminalization of cannabis was formalized with the Marihauana Tax Act of 1937. (Photo: Ryan Terhune / The Enquirer)

The examples punctuate how attitudes toward the cannabis plant, itself, and cannabis, the psychoactive drug extracted from the plant, has changed through the centuries. And how this history continues to shape policy toward this plant today. 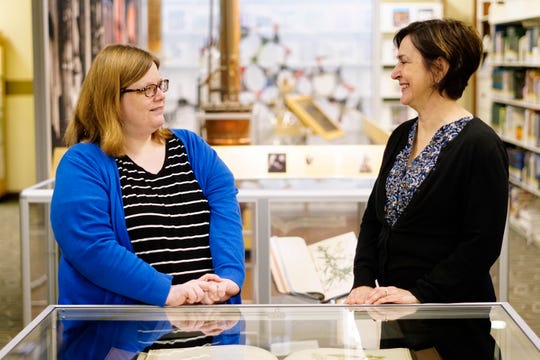 From left, Erin Campbell, a reference librarian, and Patricia Van Skaik, the executive director of the Lloyd Library and Museum, which currently features “Through the Rx Bottle,” a history of medicinal cannabis (Photo: Ryan Terhune / The Enquirer)

We recently checked out the exhibit, done with partners at the Cannabis Museum, with Campbell and Patricia Van Skaik, executive director.

Here are some more highlights of what we learned:

You’ll notice that the name of the library shows up on some of the bottle labels in the cases.

That’s because the “Lloyd” of the Lloyd museum is from the Lloyd brothers, a trio who spent their childhoods across the river in Boone County.

At the age of 14, each apprenticed as pharmacists and eventually founded the Lloyd Brothers Pharmacists company Downtown, just blocks away from where the library and museum stands today on Plum Street.

They were known as Eclectic physicians in the late 19th and early 20th centuries, which meant that they focused on healing with plants and trying to address specific ailments with specific therapies, rejecting the once-common practices of bleeding and purging.

Oh, and along the way, brothers John Uri and Curtis Gates Lloyd collected books, serials, collections and papers. These objects and items are now the foundation of more than 150,000 volumes of monographs and serials, with thousands more objects and manuscripts. Today, people come from all over the world to view this rare and remarkable collection. (Last year, folks from over 90 countries visited.) 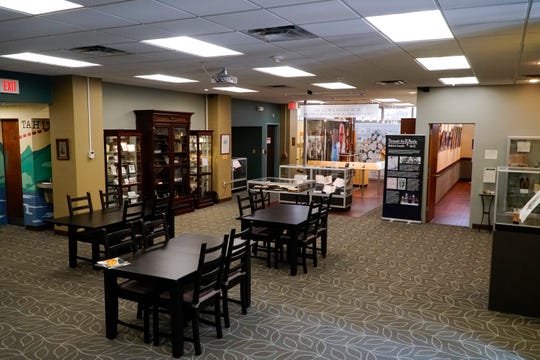 The Lloyd Library and Museum in downtown Cincinnati. The library currently features “Through the Rx Bottle,” a history exhibit on medicinal cannabis. (Photo: Ryan Terhune / The Enquirer)

In “Through the Rx Bottle,” you’ll see some examples of empty bottles of “specific medicines” produced by the Lloyd Brothers Pharmacists Inc.

One label suggests “a teaspoonful of the dilution every two to four hours” of cannabis to treat “nervous depression, tendency to melancholia, with wakefulness, mental illusions or delusions, and forgetfulness.”

And look closely at the text in the last case of the display. It features a cannabis specimen collected by Curtis Gates Lloyd in 1885. 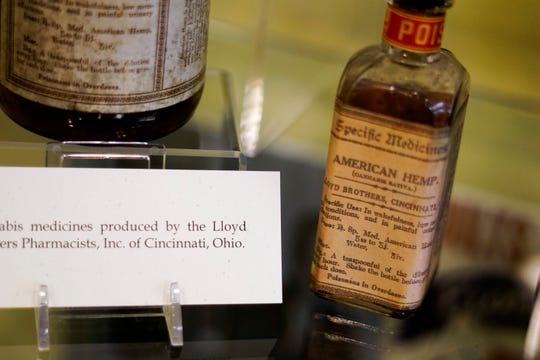 A cannabis remedy distributed by the Lloyd Brothers Pharmacists Inc., who operated a Cincinnati based pharmaceutical company and founded the Lloyd Library and Museum in 1919. The Lloyd brothers’ products are featured in “Through the Rx Bottle,” a history of medicinal cannabis currently at the Lloyd Library. (Photo: Ryan Terhune / The Enquirer)
The bottles have something to say

The second half of the exhibit really focused on the years of 1841-1937. Why those years?

Dr. William O’Shangnessy introduced the cannabis he studied in India into Western medicine in an article published in 1841. And in 1937, the Marihuana Tax Act passed, marking the first step in criminalizing cannabis commerce. (Don’t miss a detailed timeline on the wall there that goes through this year, when Ohio opened its first medical dispensaries.)

So, for about 100 years, cannabis did appear on the shelves at apothecaries and pharmacies in the Western world. Campbell and Van Skaik pointed out telling details in the shelves of bottles now up at the Lloyd. 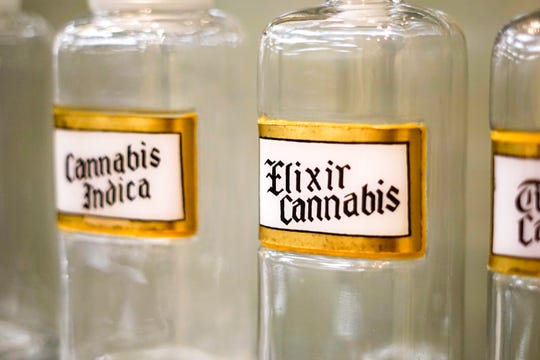 Cannabis was once commonly stocked and available in pharmacies across the country, according to “Through the Rx Bottle,” a history of medicinal cannabis at the Lloyd Library and Museum. (Photo: Ryan Terhune / The Enquirer)

If you notice how some bottles are colored, that was to distinguish which substances were considered poisonous. Some of the bottle tops are textured, too, because many would dispense medicine by candlelight, meaning they used touch to further recognize which bottle they actually grabbed.

On the lowest shelf, you’ll find a case for pre-rolled cigarettes made with Cannabis indica, a strain of the plant that was discovered in India.

That’s not necessarily the unusual part.

The cigarettes were marketed for asthma relief. The understanding, a hundred years ago, was that smoking cannabis would help relax someone suffering from an asthma attack. So, some things you read here are, well, no longer true.

But that’s part of the richness of the Lloyd collection.

The story it tells, in general, is about what’s changed, what we have learned about our bodies and how best to heal them through centuries of discovery.

And now, as Ohio enters a new chapter – one marked by the approval of medical marijuana – we can trace this future back, a page at a time, to three Cincinnati brothers.

Through the Rx Bottle: Medicinal Cannabis 1841-1937 runs now through Aug. 23. The Lloyd Library is at 917 Plum St. For more, visit lloydlibrary.org.

Read more from the source: Cincinnati.com