In Colorado, a whopping 24 percent of college students are monthly marijuana users, according to a recent report published in the February 2018 edition of the research journal Addictive Behaviors. And 10 percent of Colorado college kids have daily or “near-daily” weed habits, the same report found.

But according to a new survey underway, conducted by the Coalition of Colorado Alcohol and Drug Educators, it’s worse than that. According to CADE, a good 13.9 percent of Colorado college students say they use cannabis either daily or every other day. And in this cohort is another subgroup — an unspecified but apparently increasing number of students also cop to using cannabis between two to five time daily, according to an item on the survey recently broadcast by The Denver Channel.

What does this mean? If you are an avowed prohibitionist who is convinced marijuana legalization is the great unraveling of our society, it’s time to go online and lament. 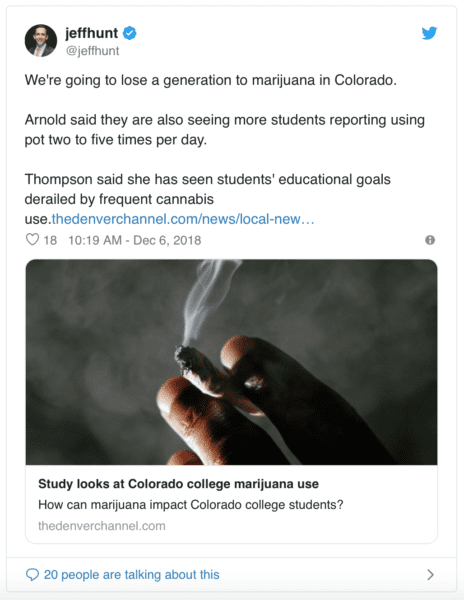 Most of us might not reach such a conclusion, because 14 percent of college kids does not quite constitute an entire “generation,” and because marijuana is not heroin, which is in fact thinning the ranks of an entire generation. So if you can bear giving this news the slightest scrutiny before posting, consider the fact that this survey actually says very little other than what we knew before: College kids smoke weed! Sometimes too much weed for their own good! In other words, the world exists much as it did.

Let’s present a hypothetical situation. Here we have two roommates, Roommate A and Roommate B. Roommate A is a real wook and dabs daily. (He’s also a theoretical physicist.) Roommate B uses CBD balm to relieve muscle pain. (She’s a poet, because why not?) This pair probably doesn’t have much in common. They certainly won’t bond over their weed habit, even though the survey would consider them identical.

This hypothetical presents the fundamental problem with marijuana-use data. It’s not that the data tends to be self-reported, though that can be an issue. It’s that, particularly with cannabis, very different substance-use habits are considered identical for purposes of the survey. The result is a not-so-keen understanding of what college kids are doing with cannabis and for what reasons, aside from “they are using weed!” Which, again, is not something that we didn’t already know.

Thus the purpose of data like this, as a tool to whip up hysteria in order to return to prohibition days, is obvious when you see it in action. But its function stops there.

What might be better is to remember that about 1 in 10 marijuana users develop a problem with cannabis use. This would mean 10 percent of the 24 percent who say they use once a month, or 2.4 percent of college students, may use too much or have trouble quitting.

That does not make their struggles any less real or meaningful, but lamenting about 2.4 percent of college kids smoking too much weed doesn’t make for good histrionic tweets or baseless moralizing. That’s why we see the numbers cooked and presented for maximum effect in the way above, all while other far more pressing threats, like alcohol, opiates and the slowly dawning reality that climate change, rising real-estate prices, and vanishing career-level job are all conspiring to make college a meaningless exercise, take the real toll.

TELL US, when was the last time you saw marijuana-related “data” that didn’t seem to add up?.