Cannabis is getting serious. With billions of dollars invested into the industry, hundreds of thousands of jobs created by it, and countless hours of scientific research dedicated to it, marijuana is no longer a thing that’s taken lightly.

As the industry developed over the last few years, America has seen a number of college and university level programs dedicated to cannabis pop up.

For instance, Northern Michigan University started offering a four-year undergraduate major degree in Medicinal Plant Chemistry a few years ago. Meanwhile, UC Davis was teaching an undergrad class titled, “Physiology of Cannabis,” and the Daniels College of Business at the University of Denver had one on the “Business of Marijuana.”

Even Harvard University offered a master class in cannabis business back in 2017.

In addition, we’ve seen a few cannabis-focused schools like Oaksterdam University, Cannabis Training University (CTU), and Clover Leaf University (which says it is the only cannabis and hemp university approved by the Department of Higher Education’s Division of Private Occupational School Board), emerge and thrive in the last decade.

“The cannabis industry is the largest job creation machine in the country, according to Leafly’s 2019 cannabis job report,” CTU’s CEO Jeffrey Zorn explained. “Last year alone, the cannabis workforce grew by 44 percent, creating more than 64,000 jobs and employing individuals who occupy a broad spectrum in terms of age, socioeconomic background, and education level.” 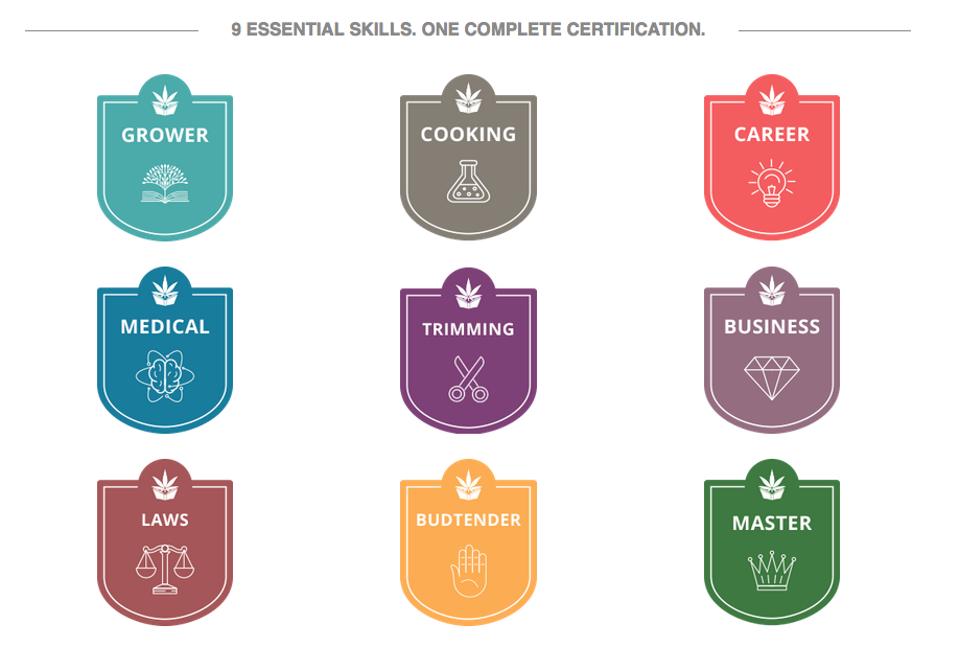 This is where institutions like CTU come in, providing resources and training both for people in the cannabis industry, as well as for those looking to get in. In fact, in the past couple of years, CTU noted significant increases in the volume of investors and entrepreneurs taking courses with them, clearly signaling a surge in demand for higher cannabis education.

Seeking to address this, two U.S. universities recently announced the launch of their own cannabis-focused graduate programs, one of which is a full blown, credited master’s degree.

One of the universities offering cannabis-focused graduate programs is the University of Maryland’s School of Pharmacy. Specializing in the science, clinical use, and policy surrounding medical cannabis, the Master of Science (MS) in Medical Cannabis Science and Therapeutics is a two-year program that blends online classwork with in-person instruction to prepare students to support patients, contribute to research, and develop well-informed policy.

The application deadline is August 15, for classes beginning August 26, 2019.

“The medical cannabis industry has experienced rapid growth in recent years, and is projected to expand even further over the next decade,” said Natalie D. Eddington, PhD, FCP, FAAPS, dean and professor of the UM School of Pharmacy. “Our MS in Medical Cannabis Science and Therapeutics aims to foster the development of an educated workforce that is prepared to help patients and health care providers better understand the therapeutic use of medical cannabis across a wide range of disease states.”

The program is designed for individuals who possess a bachelor’s degree and currently work in or are interested in pursuing a career in the medical cannabis industry.

Here is an excerpt of content that the school presented to the Board of Regents in Maryland during the process of gaining approval to offer a master’s degree level program:

The four core required courses in the program cover the principles of drug action and cannabinoid pharmacology; cannabinoid chemistry and drug delivery; clinical uses and effects of medical cannabis; and an overview of current state and federal laws and regulations along with a historical overview of medical cannabis use. After taking the four foundational courses, students will take four elective courses followed by two final advanced courses (Research Methodology and Expert Seminars and Discussion). Students may choose to take elective courses in the basic sciences, therapeutics, or policy.

The second graduate program launched recently was that of Clark University, which recently said it was launching a graduate certificate in regulatory affairs for cannabis control.

The program will provide students with a comprehensive understanding of the public policy issues involved in the cultivation, distribution, sales and regulation of adult use and medicinal-use cannabis, explained John LaBrie, Clark University’s School of Professional Studies (SPS) Dean and Associate Provost for Professional Graduate Education.

During an exclusive conversation, LaBrie said the program was “born out of the fact that there was a substantial gap between the public interest and public policy in states that have legalized adult use cannabis.

“The legalization effort has often come as a result of citizen referendum, yet the legal and public policy construct has not been fully developed to realize market integration of a previously illegal substance.”

According to LaBrie, the faculty “set out to develop a credential that filled in the gaps for policy makers as well as industry officials. Using a public policy lens, we included not only an examination of the immerging legal framework in a number of states, but we also addressed public safety, public health, and education issues faced by local and state governments. Ultimately we felt that an educational response to this issue was perhaps best implemented if it went beyond simply a discussion of the law.”

The new graduate certificate level course at Clark University will kick off with the upcoming Fall semester.