Cannabis is rapidly becoming a global financial concern as nations ranging from the U.S. to Canada to Colombia to Israel — to name just a few — are actively discussing how to best partner up and get in on this economic juggernaut. Those imminent marijuana enterprises worldwide will soon create the industry’s global supply chains, lower costs, and potentially lead to scientific research for the plant as medicine.

This month, Colombian cannabis producer Clever Leaves announced that the company is beginning the process of exporting cannabis to Canada for research purposes. That’s a first for both nations. Colombia’s National Narcotics Fund and Health Canada — the government agencies responsible for oversight of the medical cannabis industries in each nation — agreed to the deal to allow import of dry cannabis flower into Canada. It’s very likely that the arrangement was made to eventually aid Canada in its struggles to maintain adequate supplies of product since pot was made recreationally legal there starting October 17, 2018. This week, CEO Terry Booth of Aurora Cannabis Inc. confirmed the issue, telling analysts and investors on an earnings call that he “loses sleep” over the industry’s ability to supply the global cannabis market. “It will be at least five years until we have an oversupply situation,” the Financial Post reported Booth as saying. The recent enterprise between Colombia and Canada could potentially help to solve that situation.

So where are conversations about the future of legal global, and domestic, cannabis happening? Besides back-channel meetings with politicians and powerbrokers, many of the important, ground-level discussions are occurring at marijuana conferences around the world. They are happening this year in Berlin, Barcelona, Toronto, Copenhagen, Rome, Santiago, San Francisco, Cape Town, Las Vegas — essentially every region on earth where the cannabis plant is celebrated.

One of the largest such cannabis events to have ever occurred was MJBizCon in Las Vegas last November. Standing inside the exhibition area at the sprawling convention center was like viewing the World’s Fair version of the weed industry. It brought together 158 speakers — 23 speakers from outside the U.S. — as well as 27,600 cannabis professionals and 1,027 exhibitors from all over the planet. Put on by the venerable Marijuana Business Daily, a business news outlet covering the cannabis industry, the conference was a gamechanger and testimony to how far the industry has advanced in just a matter of a few years.

In Medellín, Colombia late last year, the third annual gathering of the ExpoMedeWeed brought together academics, scientists and commercial interests sharing knowledge and culture for players in the cannabis sector. The event — which in 2017 drew roughly 3,000 attendees — ballooned in 2018 to 9,000 attendees.

Last week, in my hometown of San Francisco, The International Cannabis Business Conference (ICBC) put on an event that brought together state regulators, CEOs, investment specialists, celebrities, attorneys, manufacturers — a sea of people discussing every angle of the cannabis industry. The daylong event drew 1,500 people from 20 countries with eight foreign presenters. 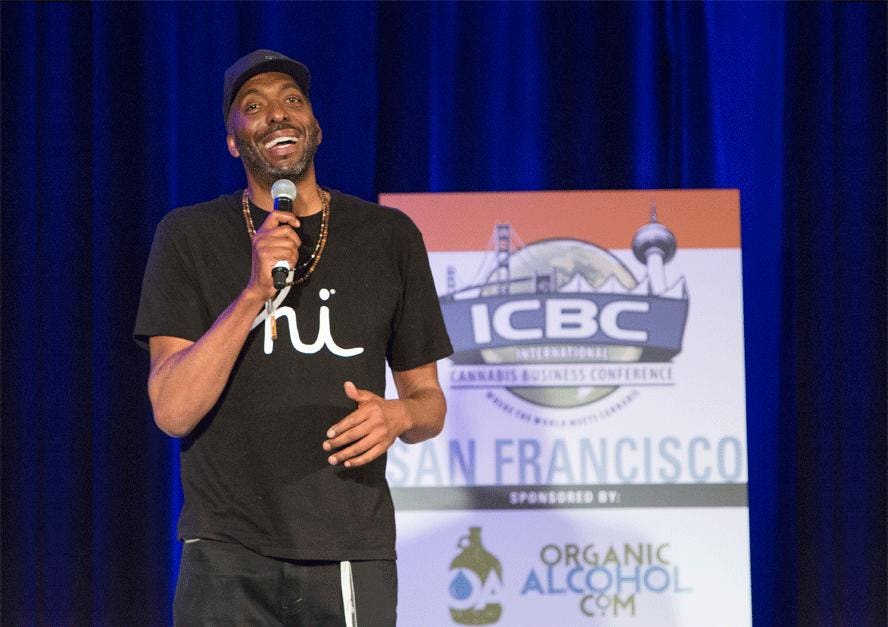 Former NBA champion John Salley — a longtime, outspoken supporter of cannabis as a replacement for opioids — attended and spoke about his experiences with doctors liberally doling out prescription pills for injuries. He echoed what’s been said by many other pro athletes over the years: that marijuana is a far better medicine for pain and inflammation relief than addictive pharmaceutical drugs. He stressed how marijuana needs to remain true to its roots in the face of a more corporate presence descending and big money entering the marijuana game.

“We need to make it Louis the XIII, not Ripple,” said Salley. “Keep the plant the plant.” He went on to say that the event in San Francisco was an “eye-opening experience for me. I learned more in one day at ICBC than in five years of poking around in the business of cannabis.”

One of the many meaningful takeaways from the conference had to do with a topic that hasn’t received a whole lot of press: intellectual property (IP) protection strategies for the community. Reiterating Salley’s statement that marijuana needs to remain true to its roots, it’s important that the individuals who built the industry — namely farmers in the fields who’ve toiled for decades — should be rewarded for their efforts and the innovative cannabis varietals they’ve bred. San Diego attorney David Branfman — with the law firm Branfman Mayfield Bustarde Reichenthal LLP, who has been specializing in IP law for over 35 years, and the past 10 years has focused on developing and implementing IP strategies for the legal cannabis community — also spoke at ICBC.

He said the next important step is to determine which of the four basic tools (patents, trademarks, trade secrets and copyrights) are the most important to protect and in what sequence according to the cultivator’s or entrepreneur’s goals and budget. “Frankly, this is something an experienced IP attorney can really assist with,” he said.

I know this to be true from my own experience with the United States Patent and Trademark Office (USPTO), the federal body responsible for issuing patents to inventors and businesses. The labyrinthine process absolutely requires a specialist attorney to navigate the twists and turns, particularly when attempting to gain IP protection for cannabis-related products, which, of course, are still considered federally illegal.

The ICBC has more events coming up this year in Zurich, Barcelona, and Vancouver. In March, their Berlin conference will include attendees from over 60 countries.